Well...this has been about a year in the making and I figure that now, being Christmas, would be the best time to unveil this project of mine: A CAA based sprite comic. I haven't had the time (nor the will) to make a site for it so...I will just post each of the strips in this thread. I hope you guys enjoy it.

Violence: 6 (there will be a some later on, including blood occasionally, but it's still just a sprite comic)

Hey, do I get a cameo any time soon?

Now really isn't the time for me to explain exactly why I am Cecil (more specifically the Dark Knight version of him)...however if your dying to know I'd be more then willing to explain it to you via PM.

USSRGirl wrote:Hey, do I get a cameo any time soon?

I am actually really curious to know why you chose that hideously crappy FFIV visage (I have a thing against most all SNES FF's... yes, MSP, even VI).

>.O I would like to suggest that since Tron Bonne was never a sprite, Queen Valentina or Pink Axem would be a suitable spritely persona for the mighty Temulin.

USSRGirl wrote:I am actually really curious to know why you chose that hideously crappy FFIV visage (I have a thing against most all SNES FF's... yes, MSP, even VI).

USSRGirl wrote:>.O I would like to suggest that since Tron Bonne was never a sprite, Queen Valentina or Pink Axem would be a suitable spritely persona for the mighty Temulin.

I already have a sprite picked out for you...and judging by your suggestions you may be disappointed...
CAA's Resident Starcraft Expert

Hey, who's all getting a cameo?

(I would like one, please. I have a custom sprite sheet...somewhere. I think I might have to make a new one. *headdesk* It's a recolor of a Yggdrasil sprite from Tales of Symphonia.)
USSRGirl, I've seen sprite sheets of Tron Bonne. I have the website here ----> http://www.sprites-inc.co.uk/

It has various MegaMan game sprites. From Classic to StarForce.

Guess this is a good time to mention this, if you want a cameo tell me via PM and I'll try my best to work you in (shouldn't be too hard...). However, depending on whether my school fixes whatever problem causes CAA to be blocked while I'm there, it may be several months until I am able to post the strip which will have your cameo. Also, if you have a suggestion for a sprite for me to use for you, then please inform me. Also, since we are on the subject of cameo's and characters, I am planning on posting a character sheet of all the members who will be appearing in this first set of strips sometime tomorrow.
CAA's Resident Starcraft Expert

Ooh thanks for the link, Hana. I might use these for avatars later!

LOL this is awesome Peanut!! I love it

[font="Georgia"]
Sakura's Deviantart
[/font]
[color="DeepSkyBlue"]
For what do I have
If I don't have You, Jesus?
What in this life
Could mean any more?- Starfield
[/color]

Wow, you have us pegged way too well... I really like this so far! Keep it up!
*insert poem, quote, or witty comment here*

Would you believe me if I said it gets better?
CAA's Resident Starcraft Expert

And why are you Cecil? You haven't even played FF4 as long as I have! XD

Mr. SmartyPants wrote:And why are you Cecil? You haven't even played FF4 as long as I have! XD 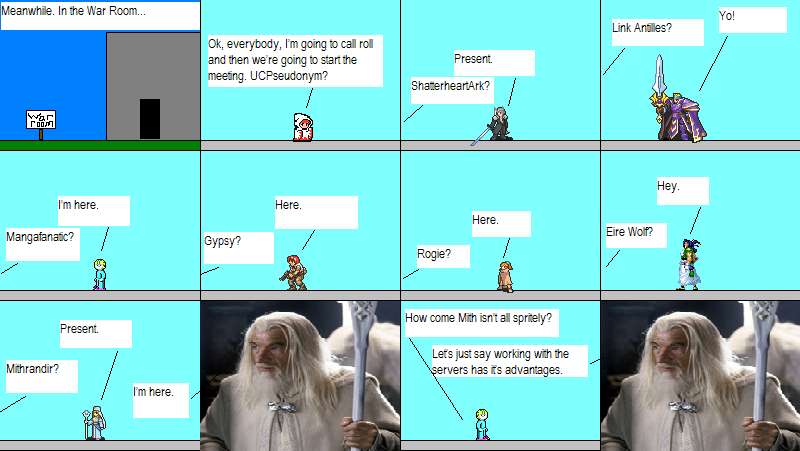 Strip 5: Out with the script? 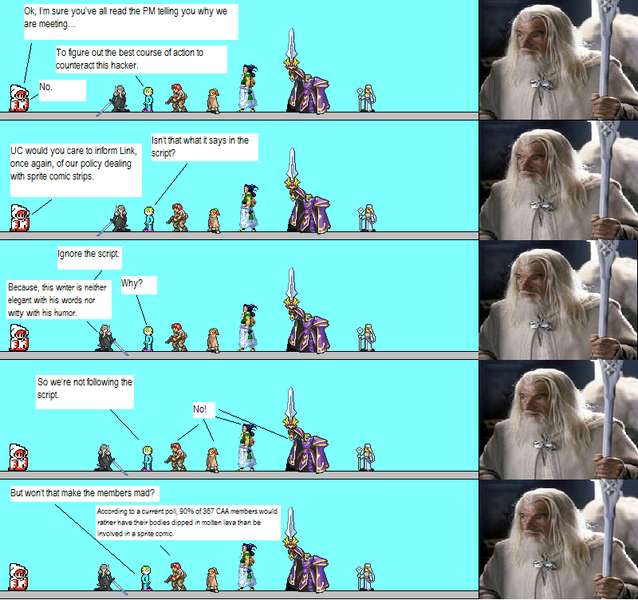 Screencaped Gandalf next to the rest of the sprite comic is probably the funniest thing so far. Nicely unorthodox. Meanwhile, it is interesting to see your choice to sprites for mods. Mine is no surprise, but I think Link Antilles as Commander Keen is an inspired decision.

Strip 6: Taking matters into their own hands 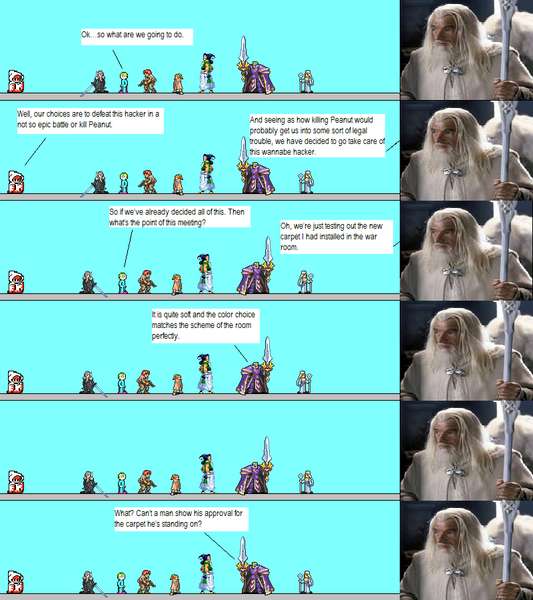 And pretty good writing, I must say. 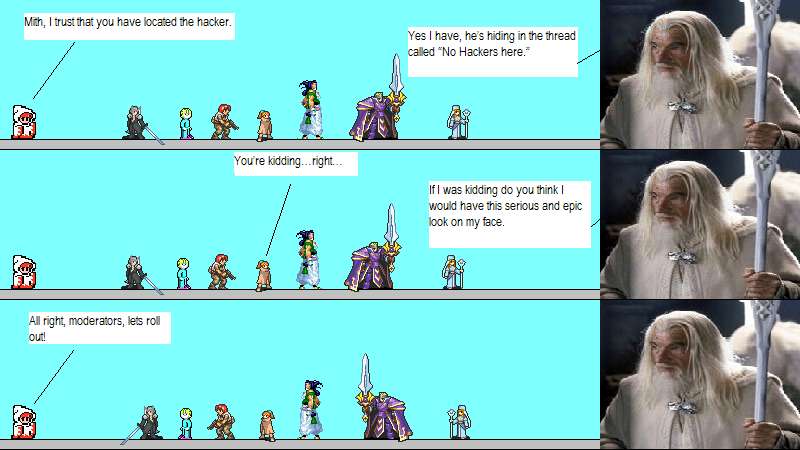 Your first strip appears to have died, at least the link is dead on this computer. And speaking of "your", the most recent comic needs a different form of it.

I was wondering when I would make my first grammatical/spelling error...thanks for pointing that out. I have also heard the same complaint about the links dying from meboeck so it's not just your computer. What I'll probably do from now on is post the image itself and a link to the image in my ImageShack profile.
CAA's Resident Starcraft Expert

May God add his blessings upon you,
That you will live this day and forever,
And when He comes to the earth again,
We will all go together...

Into Heaven for Eternity...

[color="Red"](Bwaha. Missed this because of moving stuff, but I love it.)

Well, I'm heading back to school so I probably won't be on again until like march. So, this sprite comic is going to be on a slight hiatus until I can get on again.

Users browsing this forum: No registered users and 4 guests